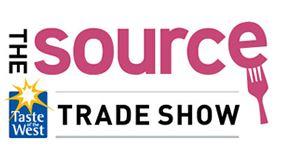 Exeter’s Westpoint Exhibition Centre was buzzing last week as the 2017 Source Trade show took place over two days. Providing what the promoters called “the perfect mix of passionate producers, alongside the hottest hospitality and catering companies”, the show offered visitors a wondrous display of all things food-related.

The show ran alongside the Westcountry Tourism Conference and provided forums for visitors including the Demo Kitchen and Our Newcomers. This section introduced newcomers to the region, and was sponsored by Diverse Fine Foods.

The Newcomers are new companies from the South West that have never exhibited at a trade show before. Exhibitors included Cornish Edible Insects who produce cookery ingredients and foodstuffs from both imported and locally-grown insects. “High in protein, low in fat, eco-friendly, sustainable, deliciously different” … what more could you ask for?

Powderkeg Brewery Ltd created a buzz on its stand as Devon’s modern English brewery, producing contemporary craft beers. Similar interest was shown to the Rusty Pig Charcuterie’s offerings of high quality British charcuterie for both the retail and restaurant trade. Finally the new Salcombe Brewery Co showed its ingenuity in combining classic recipes with new hop varieties. Its manufacturing is based on a decommissioned water reservoir using the underground ambient temperature and solar heating. 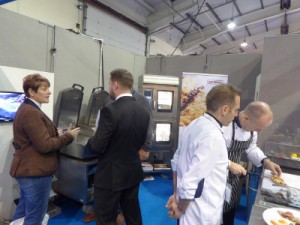 Other demonstrations came from Brett Sutton of The Michelin recommended White Post and Jim Fisher of Exeter Cookery School. Anglo Indian Chef, Ken Mathers showed his expertise in producing authentic Indian curries within a few minutes. This was watched with great interest by representatives of hospitality businesses, pubs and retailers looking for an excellent meal option.

The Rational Oven and Frima stand also had a small demo kitchen where its chefs demonstrated the versatility of the ovens. As Helen Hagger MD AC Services comments ‘It’s always a great show for suppliers of all kinds such as Rational and Frima and for meeting our existing clients, who are exhibiting. For me it was great meeting so many potential new clients with Jon, one of AC Services engineers. I look forward to following up those conversations of how we can help with their oven servicing needs.’

Running alongside the Source Trade Show was the Westcountry Tourism Conference organised by Services4tourism, in partnership with Hale Events. The conference was aimed at anyone working in the tourism industry across Devon, Dorset, Somerset.

It provided tourism businesses with the opportunity to hear from industry experts. Advice was available on a range of topics with seminars covering issues such as working with Tripadvisor, visual social media, online channels to influence Chinese tourists and the seafood coast initiative.

The south west has a tradition for its food and beverage heritage and the Source Trade Show exhibited both the new and traditional offerings from the region. One for the diary for next year for those in the South of our region. For those in the North why not check out the Food and Drink Trade Show in May at Malvern.