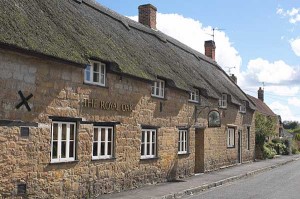 Pies are the order of the day at the Royal Oak  in Over Stratton, Somerset, courtesy of chef and owner, Jill Leaver. Her delicious and succulent pies have been delighting the diners at the historic pub for over 13 years since she and her husband, Chris took over ownership. Jill readily admits that the acquisition of a Rational oven eight years ago has been instrumental in the success of her food. “We invested in a Rational and rely upon AC Services (Southern) to ensure that the appliance runs perfectly and cooks to perfection,” she says. “The value of the oven for me lies in its combination qualities: not only does it cook the food to perfection, but the reheating ability is second to none. This is particularly useful for the pies, with the pastry coming out as crisp when reheated as when first cooked. No soggy bottoms for my pies!”

Originally built in the 1600s as a farmhouse, the Royal Oak became farm workers cottages before it received a licence to become an alehouse on the 1850s. Since then, it has enjoyed a reputation as a fine example of a typical picturesque English country pub. The venue itself is idyllic: attractive thatched roof with its Ham stone walls, flag stone floors and solid oak beams, which attracts visitors from far and wide. The Royal Oak hosts events throughout the week, with Wednesdays and Thursdays are SURF, TURF, SWINE & WINE nights and a full Sunday lunch menu. But Jill’s pies are always on the menu and are always home cooked. “Before we had the Rational oven, we had a different combination oven but it was unreliable,” she comments. “It was forever breaking down and frankly, we were uncertain of its abilities. But with the Rational, everything is clear and easy. The service we get from AC Services is invaluable. It is regularly serviced and in the event of any problems, the engineer not only comes to fix the initial problem but checks everything as standard to ensure that nothing else is amiss.” Jill maintains the oven carefully, cleaning it meticulously whenever it is used. The Royal Oak is renowned for its food and any deviation from quality will impact on its reputation. “We had an extremely busy Christmas and New Year, with diners from the local Somerset community and further afield,” she continues. “And just one week into 2016, we are busier than we have ever been. Long may it continue!”

AC Services (Southern) is delighted to count the Royal Oak as one of its valued customers. The company believes that keeping a regular eye on the equipment and responding to any query, be it small or large as well as keeping in constant contact with the client is the secret to pre-empting any major problems. The question is, does the engineer get rewarded with a pie? According to Jill, a cup of tea is reward enough! AC Services (Southern) operates across the South of England, the Southwest, and South Wales. If you run a pub and are interested in a Rational oven, why not give them a call? You can reach them on 01454 322 222.
Published Date: 12th January 2016
Category: Blog, Case Study, News
Tags: Case Study, Pubs, Restaurant