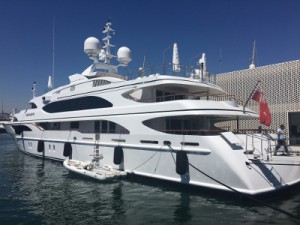 Sometimes we have to go above and beyond the call of duty and for Kevin, a senior engineer at AC Services (Southern), a passing enquiry saw him catching a flight to Barcelona and spending a night on a luxury yacht.

The story unravelled a week before the Bank Holiday weekend in March, when MD Helen Hagger took one of the company vans home. A neighbour expressed an interest in the logo on the van and when Helen explained that the company was the service partner for Rational for South West England, the neighbour became even more interested. Lee Marshall is head chef on a 60m private yacht . He is familiar with Rational ovens as he was having problems with the 6-grid Rational cook station on board the yacht.

According to Lee, “whilst cruising from the Seychelles to Italy the oven decided enough was enough and stopped working. I had contacted Rational international but they were unable to help as I couldn’t access the service area of the oven. On my return to the UK, I was informed that the Italian engineers (Rational) wouldn’t attempt to service/fix the oven unless we pulled it out of the galley and on to the hard stuff, which is something that wasn’t going to happen as it weighs a ton!”

The upshot of the conversation was that Lee asked Helen if she could help find out what was wrong with the on-board oven. And the logistics of solving the problem on a floating boat somewhere off the coast of Italy began! Being Bank Holiday, there were few engineers available at such short notice for a foreign trip. But when he mentioned that the yacht would be travelling to Barcelona the following week, a resolution became more likely. 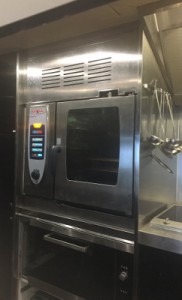 Helen provided Lee with a Rational usb stick to download the HACCP and service data. This would give him a pointer as to what was wrong with the oven. Lee rang in on the Monday morning and engineer Jon talked him through how to download the data.

It became apparent that a physical diagnosis was required so Helen asked both senior engineers if either of them would like to go to Italy or Spain. Despite the lack of a passport, Kev volunteered. The essential passport was fasttracked a few days later and in the meantime, Kev liaised closely with Lee.

With Helen away on holiday and with a limited phone signal, the onus was on Kev to solve the problem. On her return, Lee was still adamant that he wanted AC Services to sort out the oven, despite Rational service partners being available in both Italy and Spain. Helen’s return to work on Tuesday saw estimates of the cost of the repair including Kev flying to Barcelona. The captain of the yacht gave the go-ahead, the flights were booked and all the parts required were sourced and packed.

By Friday morning, the oven was under repair, with on-board engineers helping Kev to get the oven out to gain access to the left hand side panel. The problem was quickly and efficiently solved. By lunchtime, Kev was finished and free to take a look around the yacht and a browse around Barcelona. He even had time to take in some rays on the beach before he flew back the next day.

Lee is now delighted with his fully operational Rational oven. “Helen was very positive and after she contacted the office I was put in touch with Kevin, one of the engineers. He asked all the right questions to ascertain the fault and what he might need to fix the problem. I highly recommend the services of AC Services Southern and will undoubtedly use them again.”