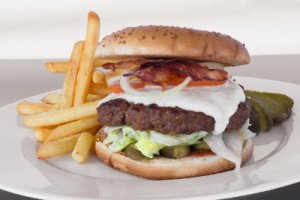 Fast food and mass catering may appear to be the invention of the 20th century but catering for the masses transcends millennia. Evidence has been excavated at the site of the Pyramids. This revealed a mess hall for the workers, long benches and tables and fish and meat bones. Armies throughout history were fed en masse (possibly not with the healthiest food but fed nonetheless) so catering as a trade has a long heritage.

The modern idea of fast food evolved with the inception of the motor industry where it became easier for people to pop into a store to buy a burger. By the 1950s in the USA, fast food was in full swing. It wasn’t long before heavy advertising and the introduction of children’s meals made it a firm favourite. Today, the global contribution of fast food outlet revenue is in the region of £500 billion.

According to a recent report in the Guardian, the total number of takeaway food shops in England has risen by 4,000 in the past three years. This is an increase of 8%. There are currently 56,638 takeaways in England. They comprises more than 25% of all the country’s food outlets.

Despite the constant criticism of unhealthy and high calorific food content, fast food is still very popular . Reasons include affordable prices, busy lifestyles and increasing on-the-go consumption. There is also a much wider variety of products available to accommodate different dietary requirements.

With any mass catering, the emphasis is on efficiency and hygiene. This is true whether it is for a fast food chain or a mess hall, hotel, hospital, airline or school. Too many instances of bad practice resulting in food poisoning or infection have been traced to bad habits in the kitchen or inadequate cooking facilities.

An oven, such as the Rational units, must not only cook the food but also synchronise the cooking of each individual element. It should also be fast and reliable in performance. In addition, the oven must be regularly serviced and checked. This is best as part of an ongoing maintenance regime to ensure top performance.

Contact AC Services on 01454 322222 if you are a fast food and mass catering organisation for appliance best practice .