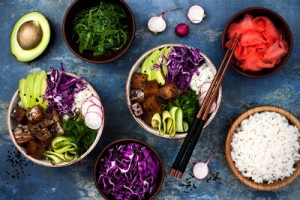 Trends come and go in the food industry with new, exotic and unusual menus springing up everywhere. We’ve come a long way from the prawn cocktail and black forest gateaux of the 1970s, which, if those of a certain age recall, was the menu of sophistication.

So what are the food trends 2017? Apparently, food is to get personal again, with the consumer calling the shots. The recent Waitrose report highlighted that the humble aubergine is fast replacing traditional carbs such as bread and pasta. The store reported an 18% increase in sales of the vegetable, with an increasing number of people opting to replace burger buns, chips and pasta for aubergine substitutes.

According to  Olive Magazine, vegan food is getting a lot of attention so get your barley risotto recipe perfected. Grains are the in-food at the moment with many chefs using them in salads as a healthy and hearty food group. Look for siyez salads as the new superfood.

Following on from a surge in interest in Jamaican food, ital (jerk spices and citrus flavours) is having an influence on vegan cooking in the UK. Also look out for Polynesian favourite poke. This raw fish salad marinated with lime, soy and sesame is becoming a fast favourite.

Vegetable yoghurt comprising carrot, beetroot, sweet potato and tomato flavours infused with yoghurt is becoming increasingly popular. For those who wrinkle their noses at the concept, think of the UK’s old favourites, chive and onion dip or cucumber raita!

Ant Fever and Other Superfoods

It may not be to everyone’s taste and indeed some thought it a joke at first but insects are most definitely on the menu. Meadowsweet porridge with ants won last year’s Rude Health Porridge Championship. They are said to balance the sweetness of the porridge with a certain sharpness and, a mantra for all things healthy, they are packed with protein.

Other superfoods to look out for are red algae, described as ‘bacon flavoured seaweed’; Kakadu plums said to contain 100 times more vitamin C than an orange; offal such as beef and pork hearts, liver, brain, kidney and other organs; goji berries; bone broth; coconut sugar; and pea protein which is both dairy and gluten free and 100% vegan friendly.

Watch out for variations on the traditional dough found in pizzas. The Dough restaurant in Bristol for example offers a choice of pizza base: turmeric and seaweed two options! And there are now more recipes for using miso. Allegedly it goes very well with marmite or mashed with sweet potato.

At a time when the industry is worrying about fruit and veg, or rather the availability of some of our favourites, new names have started to emerge. Rambutan, mangosteen and kumquats are primed to hit British supermarkets.  As is camel’s milk, which has 10 times more iron and three times more vitamin C than cow’s milk.

On the beverage front, watch out for orange wine which is proving very popular. Or there is Aquavit with its botanical infusions of caraway or dill. And watermelon water, which is essentially cold-pressed watermelon juice is supposed to be ideal for natural rehydration.

In the week that it was announced that British strawberries are available two months early, it is clear that traditional thinking may no longer work as well in the commercial kitchen. So have a look at the food trends 2017 and see what might work for you.