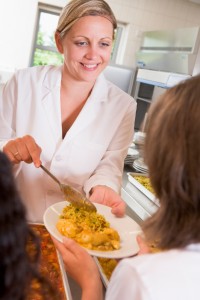 There is really only one subject dominating the news at the moment and that is the issue of free school meals. School lunches have been offered for decades. Those in primary education in the 1960s and 1970s will probably still recall the trays of overboiled cabbage and swede, and solid pastry mince beef pies.

The great British school lunch menu has come a long way since then, with a choice of much healthier and more nutritious meals. The last week or so however, has seen a storm brewing over the axing of free school lunches due to Government budget pressures.

The Education Department has revealed that it does not think that “a free school lunch for every child in the first three years of primary school… is a sensible use of public money”.

Free school lunches came into effect in September 2014 and at the time, the introduction caused a great deal of consternation within schools as 2,700 primary schools had to install new catering facilities before they could even think about offering free meals.

However, the majority rose to the challenge and adapted their kitchens for the provision required. And the policy has shown results, with many schools reporting an increase in the uptake of cooked school lunches, not only by those entitled to free lunches.

With the old scheme, all children in reception, Years 1 and 2 automatically qualified for free school meals in England and Scotland. In Year 3, free meal eligibility is linked to benefits.

Perhaps it is understandable why the National Union of Teachers general secretary Kevin Courtney said cancelling the universal offer of a hot meal in the day “mean-spirited and wrong-headed”.

Valentine Mulholland, head of policy at the National Association of Head Teachers, said: “after the nightmare of bringing this policy in at breakneck speed and all the capital funding spent to upgrade kitchens and dining facilities, it’s pretty sad to see this U-turn.”

A Department for Education spokesman said: “we continue to support the country’s most disadvantaged children through free school meals, the £2.5bn funding given to schools through the Pupil Premium to support their education and the recently announced £26m investment to kick-start or improve breakfast clubs in at least 1,700 schools.”

Best Meal of the Day

The only alternative on the table so far is free breakfasts, which are vastly cheaper at a 10th of the price, and if this is the case, then the catering staff may have to change the menus so that children get maximum nutritional value from the first meal of the day.

A sugar tax on fizzy drinks has just been announced and it is believed that the revenue from that (expected to be £200m+) could be reinvested in breakfasts. The days of the full English breakfast may be returning, with the most nutritional meals being served up to provide energy for the rest of the day.