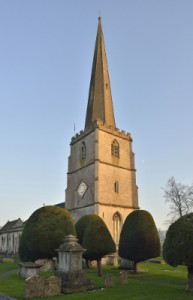 England is renowned for its quaint traditions, especially Gloucestershire, where strange and ancient events take place annually. Where else can you see cheeses rolling down a hill, football matches in rivers or burning tar barrels carried on the backs of local townsfolk? Here at AC Services (Southern) we relish the unusual and the quirky and the town of Painswick in Gloucestershire is up there amongst the best. Every year, on the Sunday after the Feast of the Nativity of St. Mary (in everyone’s calendar, surely), there is the Painswick Clypping Ceremony. This year taking place Sunday 25 September, the event is still going strong since it was revived in Victorian times. The Clypping ceremony involves the parishioners of St. Mary’s at Painswick joining hands around the church exterior and dancing around it singing their Clypping Hymn as part of a patronal festival. Puppy Dog Pie is an integral part of the festival. Although myth has it that a local innkeeper served up his pet pooch when he ran out of meat, today the only meat that the Puppy Dog Pie contains is chunks of beef! However, in keeping with the old tradition, china dogs (neither too small to be swallowed nor too big to detract from the flavour) are symbolically baked in the pies.

If that doesn’t tickle your fancy, make your way to the Slimbridge Wetland Centre where there is the launch of a new Celebrity Dusty Duck Trail this year to celebrate its 70th anniversary. The trail features six-foot-tall Dusty along with 14 giant models designed by celebrities. The event is on until 1 September but if you miss out, there is always the Giant LEGO® Trail at the same venue from 17 September to 6 November. The LEGO® brick models include a giant otter and a huge twelve-times life-sized dragonfly! If you can’t think of anything else to do on 11 September, try the Speech House Vintage Show, a steam and vintage machinery family day out in the Forest of Dean. Children’s amusements, trade stalls, live music, falconry displays and duck herding are just some of the events taking place in Coleford. Also at Speech House on 2 October is the Forest Showcase Food & Drink Festival  with a wide selection of over 100 local food stalls ranging from handmade scotch eggs, artisan breads, local beers, preserves, farmhouse ciders, cheeses, homemade cakes and pastries. Not to be missed is the turnip tossing competition. And don’t miss the Newent Onion Fayre on 10 September 2016. Hazarding a wild guess, this show is presumably focused on onions: apparently there’s a traditional onion eating contest, best onion and other competitions and even the opportunity to enjoy some onion soup! There’s also live music, a dog show and a funfair for those who really don’t like onions. It’s never dull in Gloucestershire so take advantage of the events at the end of the summer. Do something out of the ordinary and eat whatever takes your fancy!
Published Date: 30th August 2016
Category: Blog, Catering Business, Events, News
Tags: Catering business, Events, Food producers