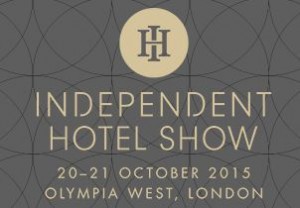 Billed as a must-attend event for independent hoteliers and industry professionals, the Independent Hotel Show 2015 did exactly what it intended.

Although official figures have not been released as yet on the numbers, the Show announced a 20% increase in exhibitor bookings compared with last year.

60% of the stands returned for 2015, and according to Miranda Martin, Show Manager, “the increase in both registrations and exhibitors is a reflection of the show’s growing appeal and its ability to provide a unique and effective platform to unite leading industry figures, suppliers and hoteliers.”

This year, the focus was on business and the Business Theatre was throbbing with seminars and talks on how hoteliers could improve their business and profits. The line-up featured a host of expert hoteliers, journalists and industry analysts, with topics ranging from new trends and initiatives to a review of the year and best service tips.

One of the more interesting discussions involved London’s proposal for its first Night Mayor, which could boost the late-night economy. The Night Time Industries Association (NTIA) has welcomed the plans as “an important step in recognising the value of bars, nightclubs, restaurants, festivals and pop ups” as well as London hotels. According to a recent NTIA report, the night-time economy has continued to grow throughout the global recession and now accounts for nearly six per cent of GDP.

Among some of the other popular seminars were those addressing other key issues, such as designing hotel environments for the modern traveller, who to look to for investment and 20 ways to ensure maximum occupancy even during off peak times. For those unable to attend, the interestingly-named seminar “Expose Yourself” turned out to be about managing properties’ reputations online.

Of course, there were the obligatory awards: The Good Hotel Guide Editor’s Choice Awards Champagne Celebration took place on October 20th highlighting the top 10 hotels in 21 designated categories. The annual Hub design competition, supported by Bridge for Design, offered the opportunity to showcase new visions and expertise in the creation and design of The Hub.

The 2015 Outstanding New Hotel and Independent Hotelier Award in association with Sky, third year, is three years old and the awards are designed to improve the recognition of all independent, luxury and boutique hotels that have been opened or relaunched within the last three years. Hotelier Olga Polizzi and Bespoke Hotel’s Manchester property Hotel Gotham were declared winners of the Independent Hotelier of the Year and Outstanding New Hotel Awards respectively.

With over 300 of the finest suppliers, service providers and experts to the hotel industry, The Independent Hotel Show 2015 was yet again a roaring success and proved that the hotel industry is thriving and constantly innovating.