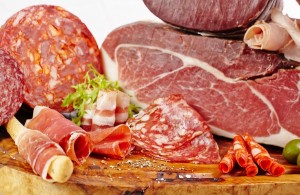 For those who enjoy their meat, the South West of England offers a veritable meat feast. From beef to venison, this region is proud of its heritage and history in producing the perfect livestock for the table.

Companies such as Bush Farm Catering in Bath offer alternative meats including bison and venison burgers. Naturally reared in Wiltshire, the company promotes its products as a “healthy alternative to traditional meats with 70% less fat than beef”.

Or if you prefer a more traditional taste, try the Devon pies and pasties from Chunk of Devon. This business grew from the back of a small butcher’s shop in a tiny Devon village until the current owners took it on in 2006 and the company started to win awards! Choose from a range of delicious pies including deli chicken bacon and leek, steak and kidney, steak and otter ale, steak stilton and mushroom and Chunk of Devon sheep pie.

Darts Farm sources the finest quality, locally produced and reared meat, the majority of which is traceable within a few miles in Devon. The company has its own herd of Ruby Red cattle, a native Devon breed until they reach full maturity, making for the best taste and texture.

If you like sausages, try Forked of Bath.  “Gourmet sausages and mash with attitude” is the claim on the website. The company sources, cooks and serves quality bangers and mash from local suppliers from its mobile catering unit. Forked sausages, bully beef, traditional Cumberland and pure gluten free beef and chicken sausages are all on the menu along with primo italiano, herby lamb, spicy merguez, snorting boar and the BLP . . . big porker, cider and black pudding!

Down at Powderham in Devon is Good Game who this year introduced exciting new recipes with soft charcuterie, rillettes and pates made from prime pork. According to a spokesperson from the company, everything is done by hand. “We cure using only salt and natural Exe estuary air. We use no Nitrates, saltpetre or curing agents. We don’t even use drying chambers – we do it the traditional way.” Try the Devon ruby steak burger or the spicy cooking chorizo sausage or the venison and pork burger.

Staying with pork, Kenniford Farm is a high welfare red tractor approved pig farm in East Devon established for over 20 years. The company breeds its own pigs on the farm for its award-winning pork, bacon, sausages and hog roasts. The hog roasting business started in 2000 and since it was launched has provided well over 3,000 hog roasts.

Take a look at Little Jack Horner and the perfect sausage roll! But these are not traditional rolls, they have a kick. Try the pork smoked chilli or the black pudding and apple flavours. There’s even a vegetarian option.

Finally, how do you fancy a bit of hand-sliced beef jerky? Cooked in a smoker using apple wood and charcoal, either silverside or topside British beef is cooked, trimmed and sliced by Privateer Jerky. If you can’t make it down to Devon, then follow the delicious beef jerky recipe kindly supplied by the company and attempt your own!

In other words if you’re attempting to serve from local suppliers, you can’t beat the meat feast from the South West for its variety whether it’s from butchers, shops, markets or farms like Proper Pork.