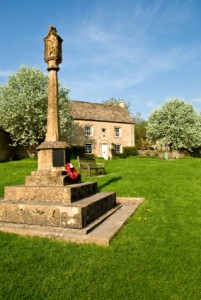 One hundred years on and the First World War is still remembered as fervently as ever.

World War I claimed the lives of over 41 million people across the globe. This makes it one of the deadliest conflicts in human history. At least 2 million died from diseases and 6 million went missing, presumed dead. One third of all casualties resulted from the 1918 flu pandemic. In military terms, more than 8.7 million men served in the British Army at some time during the four year conflict.

Throughout the years, Remembrance Day has been marked with events from services to exhibitions to concerts and this year is no different. However, many events are now giving the public the opportunity to view them for longer than the traditional Remembrance timescale.

14-18 NOW and the National Theatre are presenting an exhibition at venues across the UK telling the story of the contemporary memorial ‘We’re here because we’re here’ created by Jeremy Deller.

On 1 July 2016, over 1400 voluntary participants in WWI uniform appeared unexpectedly in locations across the UK. This  was a reminder of the 19,240 men killed exactly one hundred years previously on the first day of the Battle of the Somme. Having travelled across Wales, the exhibition will be based at the Theatre Royal Plymouth from 6 to 25 November 2017 and then Aberystwyth Arts Centre from 20 January to 14 April 2018.

In Bristol at the Hippodrome Theatre, the touring show War Horse  will be running from 18 October to 11 November 2017. Michael Morpurgo’s tale of bravery, loyalty, and the extraordinary bond between a young recruit and his horse is set in the First World War.

Actors work with life-sized puppets by the internationally renowned Handspring Puppet Company. The author discovered that over a million horses died in the war just on the British side with most of the surviving animals sold off after the war was over to French butchers. This became the inspiration for his book and subsequent play.

In Bovington, Dorset, the Tank Museum is hosting the official remembrance service on behalf of the Bovington Garrison on 12 November 2017. This is attended by serving soldiers, veterans and their families as well as being open to visitors. A wreath laying ceremony will take place at the Royal Armoured Corps Memorial, outside the Museum. There may be a shortage of space but the Tank Museum itself is home to many historic vehicles from the WWI era and is worth a visit. New this year is the Tiger Tank Collection, where in a world first, the Tank Museum has brought every member of the Tiger Tank family together in one display.

On 7 November 2017, the Senedd in Cardiff is hosting a talk from Professor Alan Llwyd for the fourth annual First World War commemorative lecture. Alan Llwyd’s lecture will commemorate the life and work of Hedd Wyn, a centenary on from his death. Poet Hedd Wyn was tragically killed during WWI at the Battle of Passchendaele. He posthumously won the Chair at the Birkenhead National Eisteddfod in 1917.

On Remembrance Sunday, churches and communities throughout the UK will be honouring the fallen and injured of all wars and conflicts. Thus continuing a celebration of the lives of those who fought in the First World War; a tradition that has lasted a century.