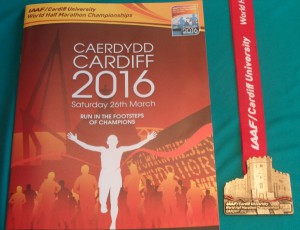 Surprisingly for Wales, it rained and was windy on Saturday, but that didn’t dampen the spirit of all those who took part in the IAAF/Cardiff University World Half Marathon Championships to run in the footsteps of champions.

The world’s best runners, including top Ethiopians and Kenyans as well as Mo Farah, descended on Cardiff for the event, which proved exciting and tense.

Birmingham was the last British host for the IAAF World Half Marathon Championships in 2009. 2016 was the first time the UK has also hosted a public race at the same time as the elite runners reflecting the growth in the numbers now running this distance.

The race was won by last year’s winner Geoffrey Kamworor in a time of 59:10, setting a new course record, even though he suffered a fall at the start, while his team mate and compatriot Bedan Karoki finished second.

Britain’s Mo Farah delighted the crowd by finishing third. Prior to the race, Farah expressed his delight and anticipation of the event. “I’m really excited to be here. It’s part of my journey to Rio. I want to be here and I love the support of the home crowd – it makes a massive difference.”

The medal for Farah came in his first entry in the event, and was the first by a British man since 1993, when Carl Thackery took bronze in Brussels. For the Welsh contingency, Welshman Dewi Griffiths achieved a personal best of 1:04.10 and 27th place as well as finishing in the top three British finishers.

In the women’s race, Kenya stole the accolades with Peres Jepchirchir winning from Cynthia Limo and Mary Wacera in a time of one hour seven minutes and 31 seconds. Great Britain’s Alyson Dixon was the highest-placed home runner in 27th with a time of 1.12:57.

Over 16,000 registered runners took to the streets and enjoyed the warmth of the enduring support of the crowd. Tagged by the organisers as the opportunity to run in the footsteps of champions, the reality for some was simply to beat the conditions as ideas of personal bests got blown away across Cardiff Bay!

The events in Cardiff are not just about the runners. Catering is at its foremost, with a number of catering companies geared up to offer healthy meals tailored to the sporting elite. Diet is vital to athletes so spare a thought for those who ensure that the right ingredients and food combinations are available at all times to ensure that nutrition is suitable for the individual athlete’s exact requirements.

Equally for the non-elite runners while the build-up was all careful carbo loading the day before, once the race was run, it was surprising how many hot chocolates and cakes needed to be consumed across the city in cafes and coffee houses by runners and supporters alike.

Here at AC Services (Southern), we know from experience that the Rational range of ovens is one of the only appliances on the market that can cook variably, from grilling to steaming to roasting. In addition, it allows a variety of food to be served at the same time . . . no waiting, no cold food and no delays. Just what any runner, regardless of how fast they are, needs after they have run in the footsteps of champions.