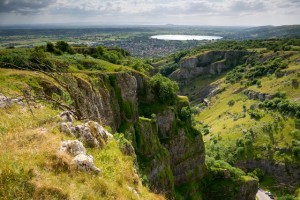 Somerset is synonymous with Cheddar cheese, but there are so many more delicacies that the county offers.

The Bath Bun, sprinkled with sugar and coloured with saffron is as famous as the doughy Sally Lunn Cake, piping hot with lashes of cream. The Bath Oliver cracker biscuit goes nicely with Bath Chaps. These are pigs cheeks or lower jaws salted and smoked then boiled and coated in breadcrumbs.

But it is the Cheddar brand that has been a favourite for centuries. When poor imitations started to crop up by the 18th century, stringent rules were put down to protect it.

The first cheese made at Willet Farm near Taunton was a sheep’s milk cheese. This was shortly followed by the product after which the company is named and which is the flagship of the business; Exmoor Blue.  Made from Jersey cows’ milk, it was the forerunner of the range of cheeses now produced on the site of the farm.

All cheeses, including Somerset Blue, Partridge’s Blue and Buffalo, are handmade to traditional recipes and methods using only the milk from local herds. To the milk is added vegetarian rennet, starter cultures, penicillin roqueforti (which gives the characteristic blue tang as the cheese is matured) and salt. Exmoor Blue has been awarded Protected Geographical Indication status. This ensures that the cheese is made to specified standards using local milk from within the designated area.

Honey, the natural sweet nectar is also produced in quantity in Somerset. Sedgemoor Honey  is situated on the outskirts of Taunton. It produces the finest Somerset honey available through local shops, farm shops and National Trust outlets.

From two hives on the back garden in the 1970s, owner Chris Harries now runs 300 colonies of bees. Divided between 20 apiaries, they forage for nectar in the fields and hedgerows of Somerset. During the summer months many of the hives are relocated to changing nectar flows. This includes the purple heather of Exmoor, with its distinctive aroma and flavour. As well as providing a much desired pollination service for local farmers and growers, the company also rears queen bees and nucleus colonies for sale to other beekeepers.

Stoneage Organics specialises in organically grown produce. In addition to a farm in Oake, the family run business also has a farm near Bishop’s Lydeard. This has been fully organic since 1st January 2001, where the majority of the growing is now done.

Stoneage has been growing organic vegetables since 1988 and introduced the Vegetable Box Scheme in 1993. Each week, a selection of fresh, seasonal produce is packed into three sizes of box. Potatoes and carrots appear virtually every week, and onions most weeks. The remainder of the box is made up of various items depending on the time of year from aubergines, Brussels sprouts, beetroot, broad and runner beans, cauliflower, celery, chard, Chinese leaves, courgettes, fennel, pak choi, parsley, parsnips, peppers, radish, spinach, squash and more!

There are many more local food producers in Somerset that need a shout out. So no doubt the AC Services series will feature some more soon.