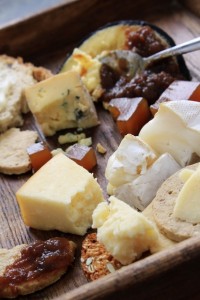 “Give me a good sharp knife and a good sharp cheese and I’m a happy man.” Wise words indeed from Game of Thrones author, George R.R. Martin, but even he would be spoiled for choice if he ventured down amongst our South West cheese.

Gloucestershire, Devon, Dorset and Cornwall are renowned for their regional foods and cheese is integral to the menus of each region. We are all familiar with Cheddar and Gloucester Red varieties, but throw in a Dunlop or a Forest Oak and it gets more intriguing!

From Gloucester to Cornwall

Woefuldane Organic Dairy is a small family-run business in Gloucestershire which produces organic cheeses, such as Dunlop. The cheese was originally from a town called Dunlop in Ayrshire, then Woefuldane bought the setup 20 years ago when the original supplier sold up. From an ancient recipe, the cheese is now produced in Gloucestershire with a buttery texture and strong flavour.

Another favourite cheese is Forest Oak, which started life as a cloth ripened Dunlop. According to the company, “Forest Oak is smoked twice over oak chips at Severn & Wye Smokery in the Forest of Dean and this is noticeable in its rich yet subtle smoky taste and wonderful crumbly texture”.

Moving down to Dorset, the Woolsery Cheese Company has been the home of award-winning cheeses since 1992, with all produce suitable for vegetarians and gluten free. As well as flavours such as Meadowsweet soft cheese and English Herb Cheese, the company also regularly produces new flavours, including the soft mould ripened cheese, Nanette, which won Silver at the Taste of the West Cheese Awards. This traditionally handmade camembert style cheese ripens to give a white moulded rind with a firmer centre. What makes the company unique however is the launch of cheese wedding cakes to order!

In the Devon town of Newton St Cyres is Quickes, boasting a cheese-making legacy of nearly five centuries. 14 generations of the same family have been handcrafting cheeses from specially-bred cows on the farm, producing artisanal cheddar to suit every palate, from the Quicke’s Buttery cheddar to Quicke’s Mature and the two-year-matured Quicke’s Vintage.

Finally, Cornwall boasts a huge choice of cheeses, including the nettle covered Cornish Yarg which is only produced by Lynher Dairies in Ponsanooth in Cornwall but is exported over the world. 2016/17 will see the launch of the newest cheese, Cornish Kern, which is made to a different recipe and is longer maturing with a black waxy rind. The company also produces the Wild Garlic Cornish Yarg.

Cheese is a great British favourite and with so many varieties and flavours to choose from, the South West of England is way up there in cheese manufacture. So there can be no excuses really to prevent the region’s pubs, cafes and restaurants from showcasing truly local South West cheese on their menus.