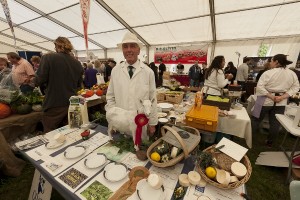 From beer to fish to fruit and meat (not forgetting cheese of course), Gloucestershire has it all when it comes to local food producers. Uniquely situated in the heart of England, the county is renowned for its fine food and beverages and suppliers are plentiful.

Let’s start with cheese. Gloucestershire has a well earned reputation for excellent cheeses, ranging from the conservative cheddar to more exotic varieties, such as chilli and smoked. One of the most popular suppliers is Godsells Cheese, who makes handmade cheeses at Church Farm, in the Gloucestershire village of Leonard Stanley. The company uses milk from its own herd of cows, producing such delights as Double Gloucester, Single Gloucester, Hooded Monk, Leonard Stanley, Three Virgins, Holy Smoked, Singing Granny, Nympsfield and Scary Mary Cheeses.

The company is one of only four cheesemakers in Gloucestershire able to make Single Gloucester cheese with a Protected Designated Origin. This means it can only be made in Gloucestershire. The Cheddar is aged for a minimum of seven months, while Scary Mary is a Nympsfield (a fresh soft cheese) left to go mouldy!

Moving onto meat and Macaroni Farm supplies a range of organic meat to suit all tastes. The farm dates back to the late 1600’s, and has been in the Phillips family since 1891. The farm supplies extensively and traditionally reared organic beef, slaughtered locally to keep ‘food miles’ to a minimum. It is hung for 28 days to allow the meat to tenderise and reach maturity. Its award winning organic lamb is available as whole or half lambs direct from the farm. Pheasant and partridges are available throughout the shooting season.

If its venison you are after, look no further than the Withington Estate for Withington Wild Venison, which is hunted from the estate’s managed woodland. All of the venison (roe and fallow) is truly wild, neither farmed nor from a deer park.

Gloucestershire is also famous for its many varieties of fruit and at Bentleys Castle Fruit Farm you are assured of a huge range. Plum varieties include Herman, Opal, Reeves Seedling, Avalon, Victoria, Valor and Marjorie Seedling. There over 12 seasonal varieties of apples, two varieties of pears and seven varieties of cherries. There are a range of juices, sauces, syrups and relishes all made from freshly pressed apples, pears and plums .

For farm grown fruit and vegetables, Over Farm grows more than 20 different crops throughout the year which are sold in its farm shop, from asparagus in spring, strawberries in the summer, pumpkins and squash in autumn and sprouts in the winter.

Finally, it’s worth mentioning Cheltenham’s David’s Chilli Oil “created with passion and a commitment to enliven food with delicious heat.” Perfect for drizzling over hot or cold food, marinating, cooking and dipping. The heat of the chilli comes from the capsaicin oil which is present in the chilli found mostly in the seeds and the ribs of chilli peppers. Here’s a little known tip: drinking water to cure a burning mouth is useless. Try fat instead such as milk, yoghurt and even peanut butter!