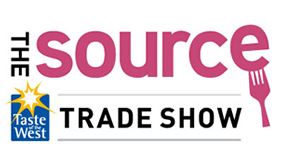 Storm Imogen hit the South West last week with devastating gales and coastal chaos but it did not stop the Source Trade Show at The Westpoint Exhibition Centre in Exeter seeing droves of visitors and exhibitors enjoy the two day festival!

‘Inspiration and opportunity on a plate’ was the slogan and the Source Trade Show did not disappoint, providing the perfect mix of “passionate producers … hottest hospitality and catering companies, and the freshest food service”. Exhibitors came from far and wide, representing local, regional and national catering and hospitality suppliers, manufacturers and regional food and drink producers.

The show itself offered a number of exciting features for visitors, including the Demo Kitchen, which needless to say was extremely well attended at all times. The itinerary was varied: Wednesday 10 February saw Jack Sharland, Exeter College Student and South West Student Chef of the Year, preparing scallops followed by pheasant breast with butternut and mushroom sauce and Richard Hunt, preparing Bramley apple vanilla meringue tarts. Richard is a professional hospitality consultant, from The Devon Scone Company. This was followed by Bini Ludlow, of Sweet Cumin cooking authentic Indian cuisine.

The second day of the event featured representatives from amongst others the Royal Navy, with explanations about the careers in catering in the armed forces. There was also a Student Demonstration from Exeter College, which offers a range of full time and part time courses, apprenticeships and training for all ages.

Chef Proprietor at Tierra Kitchen in Lyme Regis, Mark Evans demonstrated why Tierra Kitchen is considered to be at the forefront of a renaissance in modern West Country vegetarian cookery, with a recipe for Roast Butternut Squash and Applewood Cheddar Tart Tatin, with cauliflower puree, purple sprouting broccoli and pink grapefruit dressing.

One of the most interesting talks was by Joe Mann past winner of Teacher of the Year and the award for Best School Food in Devon. As a partner of the Growing Devon Schools Partnership and a Jamie Oliver Food Revolution Ambassador, he demonstrates how he inspires fun food science experiments in the kitchen!

The menu for the two days embraced over 210 exhibitors, 22 companies from the South West that have never exhibited at a trade show before and 60 first time exhibitors. These included the Chesil Smokery from Bridport, West Dorset, delicious smoked fish, meat and poultry using traditional methods that do justice to the ingredients they’re brought by their suppliers. The Source Trade Show was a huge success and the organisers are already planning ahead for 2017!