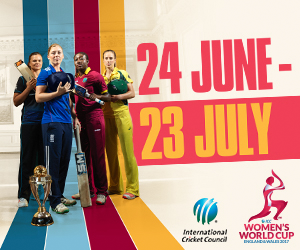 The excitement of the end of season matches in rugby and football is now over. This summer sees us settling back to watch more sedentary sports like tennis and cricket.

They may not draw the same crowds as the winter sports, but there now seems to be an explosion of cricket with the Champions Trophy. But more importantly it’s the start of the ICC Women’s Cricket World Cup  taking place between 24 June and 23 July and which is attracting great excitement.

Hosted by both England and Wales, the 2017 Women’s Cricket World Cup is an international women’s cricket tournament which has been going for 11 years. It is the third time it has been held in England (after the 1973 and 1993 tournaments), both of which England won. No pressure there then…

Eight teams have qualified to participate in the tournament: Australia, England, New Zealand, West Indies, India, South Africa, Sri Lanka and Pakistan. Lord’s will host the final, and other matches will be played at the home grounds of Derbyshire, Leicestershire, Somerset and Gloucestershire.

Good news for cricket fans: the ICC announced that 10 games will be shown live on television, while the remaining 21 matches will be streamed live via the ICC website.

For those who are unfamiliar with women’s cricket, it may surprise you to learn that the ICC Women’s Cricket World Cup is the oldest and most prestigious international women’s cricket tournament in the world.

It was first held in 1973 two years before the inaugural men’s tournament. Since 2005, it has held a regular four-year slot. However, the international scene originally stretches back to 1934, when a party from England toured Australia and New Zealand and won.

To date, ten World Cups have been played in five different countries with Australia winning six titles and England three .

The timetable for the qualifying matches is as follows:

The final will be held at Lord’s on 23 July.

The Women’s Cricket World Cup provides an opportunity for most catering businesses to run slightly different events than those for other sporting tournaments as it spotlights women’s sport. Given women’s sport is growing faster than men and the South West England focus of these matches it would be silly to miss out.