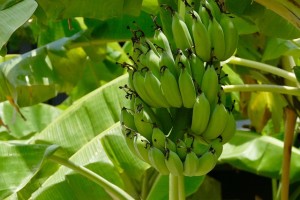 Bananas have been hitting the headlines recently in more ways than one.

Only last week, a leading supermarket charged a shopper more than £930 for just one banana, worth 11p. Computer error was blamed and a supermarket spokeswoman apologised profusely: “Whoops, looks like we’ve slipped up here.”

Joking apart, there are very serious concerns about the future of the humble banana. This follows the spread of a deadly fungus which is feared may wipe out the fruit completely. Bananas rate among the most popular of fruits. They taste great and they are high in potassium and protein and can even help lower blood pressure.

The most-exported banana in the world was the Gros Michel (Big Mike). This enjoyed supremacy for many decades until a fungus known as Panama disease or banana wilt almost completely wiped them out in the 1950s. In fact the song, Yes but we have no bananas directly refers to the event.

Today, a variety called the Cavendish, bred originally in Derbyshire, accounts for 99% of banana export. This breed was immune to the fungus, until now. The disease has resurfaced under a different name, Tropical Race 4 (TR4). It is believed to be even more virulent and a distinct threat to the yellow delicacy.

According to Dan Koeppel, author of the bestselling book Banana: The fate of the fruit that changed the world, the latest strain is caused by a common type of fungus called Fusarium.

“A single clamp of contaminated dirt is enough to spread it like wildfire, and it can be transported by wind, cars, water,” he explains. “The pathogen works by invading a plant and infecting its roots, then moving up through the xylem – the tissue that transports water and nutrients – causing a blockage. The plant subsequently wilts and dies.”

Incidents of the fungus have been reported in Australia, South-east Asia and Africa, and experts  are already likening it to the potato famine in Ireland in the 1840s. Farmers then refused to diversify. They grew only a few breeds of potato.  This monoculture ultimately led to the global disaster, with millions dying directly from the potato shortage.

Now the banana industry is facing a similar problem. The demise of the sole heir to Big Mike, the Cavendish seems only a matter of time. Experts say that the only real solution would be to burn the plantations down and start over with a different crop.

However, all is not lost. Africa is currently undertaking a 12-month emergency project funded by the Food and Agriculture Organisation (FAO) to tackle TR4. There are hopes that the disease can be contained to the areas where it has been found. This is very similar to the treatment of foot and mouth in the UK, where disinfectant baths and sprays helped contain the disease.

And recently, a strain of the Cavendish banana in Taiwan was discovered that might be resistant to the fungus. With promising results so far, with some of the plants still getting the disease, others seem to be stronger and able to fight it off.

We, at AC Services, hope that the banana industry survives and that the diversification works to restrict future outbreaks. Otherwise bananas will be another staple missing from the future UK catering menu.

One Response to Yes But We Have No Bananas